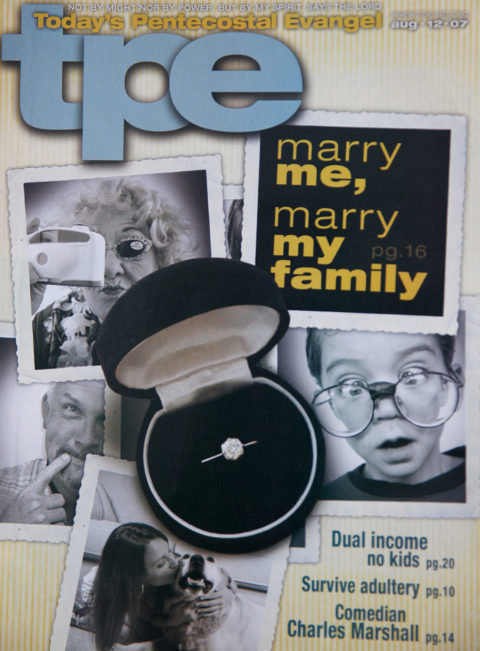 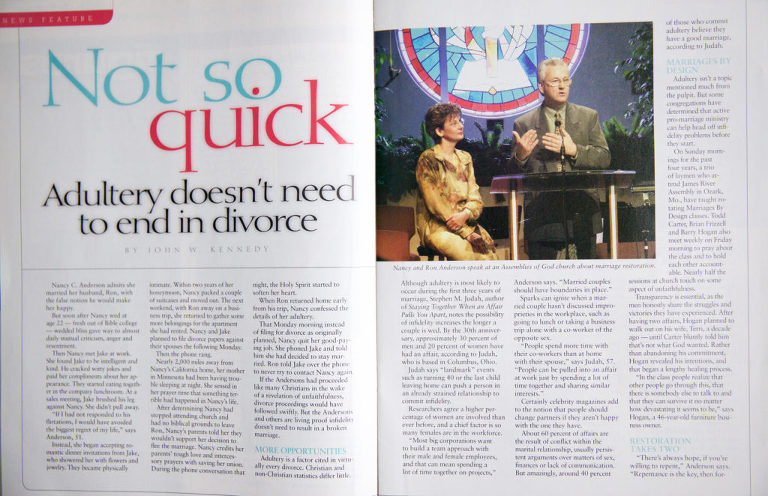 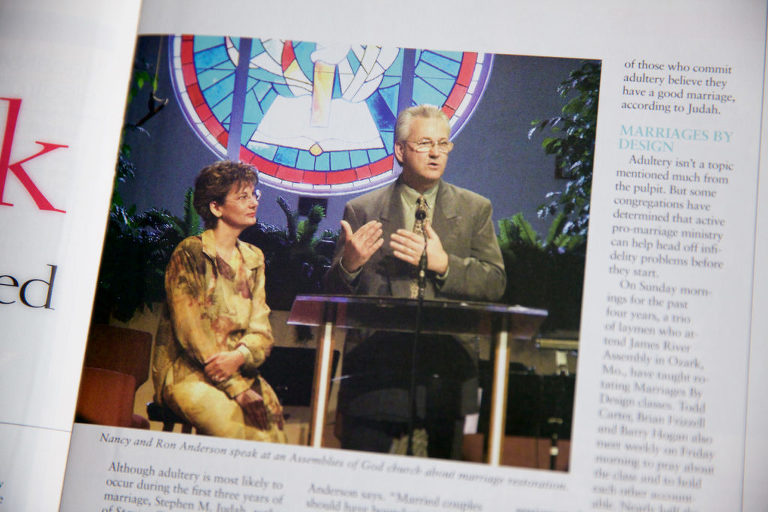 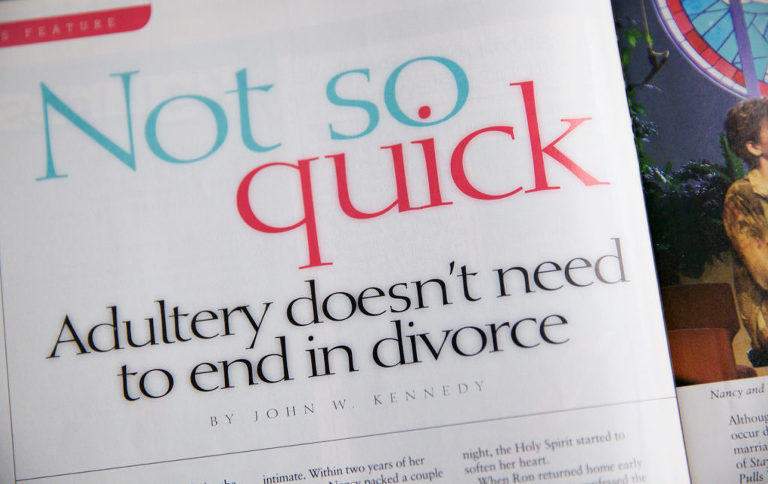 Nancy C. Anderson admits she married her husband, Ron, with the false notion he would make her happy.

Then Nancy met Jake at work. She found Jake to be intelligent and kind. He cracked witty jokes and paid her compliments about her appearance. They started eating together in the company lunchroom. At a sales meeting, Jake brushed his leg against Nancy. She didn’t pull away.

“If I had not responded to his flirtations, I would have avoided the biggest regret of my life,” says Anderson, 51.

Instead, she began accepting romantic dinner invitations from Jake, who showered her with flowers and jewelry. They became physically intimate. Within two years of her honeymoon, Nancy packed a couple of suitcases and moved out. The next weekend, with Ron away on a business trip, she returned to gather some more belongings for the apartment she had rented. Nancy and Jake planned to file divorce papers against their spouses the following Monday.

Then the phone rang.

Nearly 2,000 miles away from Nancy’s California home, her mother in Minnesota had been having trouble sleeping at night. She sensed in her prayer time that something terrible had happened in Nancy’s life.

After determining Nancy had stopped attending church and had no biblical grounds to leave Ron, Nancy’s parents told her they wouldn’t support her decision to flee the marriage. Nancy credits her parents’ tough love and intercessory prayers with saving her union. During the phone conversation that night, the Holy Spirit started to soften her heart.

When Ron returned home early from his trip, Nancy confessed the details of her adultery.

That Monday morning instead of filing for divorce as originally planned, Nancy quit her good-paying job. She phoned Jake and told him she had decided to stay married. Ron told Jake over the phone to never try to contact Nancy again.

If the Andersons had proceeded like many Christians in the wake of a revelation of unfaithfulness, divorce proceedings would have followed swiftly. But the Andersons and others are living proof infidelity doesn’t need to result in a broken marriage.

Adultery is a factor cited in virtually every divorce. Christian and non-Christian statistics differ little. Although adultery is most likely to occur during the first three years of marriage, Stephen M. Judah, author of Staying Together When an Affair Pulls You Apart, notes the possibility of infidelity increases the longer a couple is wed. By the 30th anniversary, approximately 30 percent of men and 20 percent of women have had an affair, according to Judah, who is based in Columbus, Ohio.

Judah says “landmark” events such as turning 40 or the last child leaving home can push a person in an already strained relationship to commit infidelity.

Researchers agree a higher percentage of women are involved than ever before, and a chief factor is so many females are in the workforce.

“Most big corporations want to build a team approach with their male and female employees, and that can mean spending a lot of time together on projects,” Anderson says. “Married couples should have boundaries in place.”

Sparks can ignite when a married couple hasn’t discussed improprieties in the workplace, such as going to lunch or taking a business trip alone with a co-worker of the opposite sex.

“People spend more time with their co-workers than at home with their spouse,” says Judah, 57. “People can be pulled into an affair at work just by spending a lot of time together and sharing similar interests.”

Certainly celebrity magazines add to the notion that people should change partners if they aren’t happy with the one they have.

About 60 percent of affairs are the result of conflict within the marital relationship, usually persistent arguments over matters of sex, finances or lack of communication. But amazingly, around 40 percent of those who commit adultery believe they have a good marriage, according to Judah.

Adultery isn’t a topic mentioned much from the pulpit. But some congregations have determined that active pro-marriage ministry can help head off infidelity problems before they start.

On Sunday mornings for the past four years, a trio of laymen who attend James River Assembly in Ozark, Mo., have taught rotating Marriages By Design classes. Todd Carter, Brian Frizzell and Barry Hogan also meet weekly on Friday morning to pray about the class and to hold each other accountable. Nearly half the sessions at church touch on some aspect of unfaithfulness.

Transparency is essential, as the men honestly share the struggles and victories they have experienced. After having two affairs, Hogan planned to walk out on his wife, Terri, a decade ago — until Carter bluntly told him that’s not what God wanted. Rather than abandoning his commitment, Hogan revealed his intentions, and that began a lengthy healing process.

“In the class people realize that other people go through this, that there is somebody else to talk to and that they can survive it no matter how devastating it seems to be,” says Hogan, a 46-year-old furniture business owner.

“There’s always hope, if you’re willing to repent,” Anderson says. “Repentance is the key, then forgiveness. Both are required to save the marriage.”

Frizzell, 48, a full-time Christian counselor, agrees that both spouses must work at rebuilding. “Forgiveness is given, but trust must be earned,” he says.

For a marriage to be saved, experts say there must be an immediate severing of all contact with the adulterous party. That may mean leaving the church, neighborhood or job you love. Refusing to cut off proximity with the third party invites disaster.

After their reconciliation, the Andersons spent a dozen years teaching marriage classes at the Assemblies of God church they attended in Cerritos, Calif. Now together for 29 years, they continue to speak during marriage enrichment seminars at AG churches.

The offending party also should be willing to divulge, if asked, details such as how long the affair went on and who else knew about it, experts say. Forgiveness needs to be unconditional; the affair shouldn’t be used as a weapon in future disagreements.

Every couple of months, Hogan shares his testimony before the Marriages By Design class. Hogan, who had been a deacon and worship leader at another church with a seemingly model marriage, has helped many couples whose marriage is about to implode.

“You don’t have to broadcast it to the world, but you do need to have a place to share,” Hogan says. “When the couple realize they aren’t alone, it’s the beginning of the resurrection of the marriage.”

“It’s not easy to stand up and admit that I have sinned,” Hogan says. “But God re-established trust in our marriage that I only dreamed of.”

Feelings of sadness, anger or fear are normal in the aftermath of an adulterous admission. Consequently, it’s not the best time to poll friends about what to do.

“The disclosure circle needs to be as small as possible for healing to occur,” Judah says. “The more people who know, the more voices there are giving advice to a confusing situation.”

Experts suggest Christian counseling is tremendously beneficial in allowing the couple to help restore the marriage.

“Getting biblical advice is important,” says Carter, 44, a computer-learning center vice president. “It doesn’t matter what you’ve been through, you can have a great marriage if you both look to Christ.”

Anderson, who details her story in Avoiding the Greener Grass Syndrome: How to Grow Affair-Proof Hedges Around Your Marriage, stresses that people attending church every Sunday aren’t immune from improper romance.

“Being attracted to someone isn’t the sin,” Anderson says. “Acting on it is.”

Just as the marital breakdown took awhile to develop, rebuilding trust likely won’t happen overnight. It must be done through actions, not merely promises.

The offending party should be accountable for his or her whereabouts at all times, fully disclose all e-mail passwords and accounts, and grant access to all cell phone contact numbers, Anderson says.

It also might be a good idea to have an older couple with a well-established marriage provide encouragement and reassurance of how to get through the readjustment process.

Among the boundaries Anderson suggests are:

• Don’t ride in a car with a person of the opposite sex without a third party present.

• Don’t eat lunch alone with a person of the opposite sex.

• Make sure your e-mails aren’t suggestive or flirtatious.

• Don’t touch a business associate of the opposite sex beyond a handshake.

• If you are attracted to someone else, tell your spouse. That can help snuff out the allurement before it grows in secret.

Carter says the best hope for protecting marriage is the realization that God provides grace and mercy to those who forsake adultery. But he says Christians need to remember that everyone sins.

“The biggest mistake someone can make is to say, ‘That could never happen to me,’ ” Carter says.